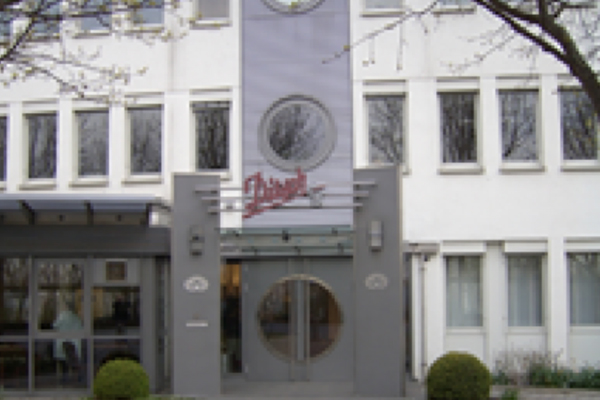 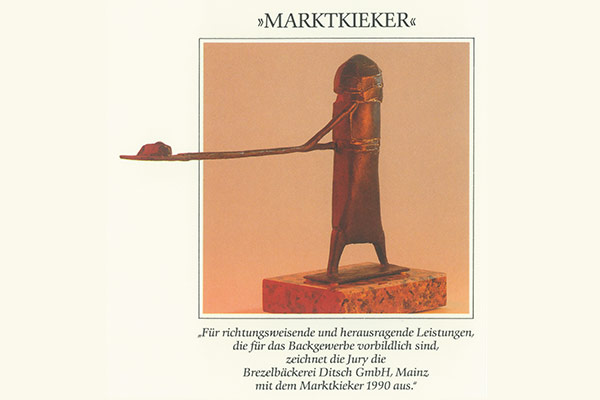 And the sector Oscar goes to:
Ditsch! 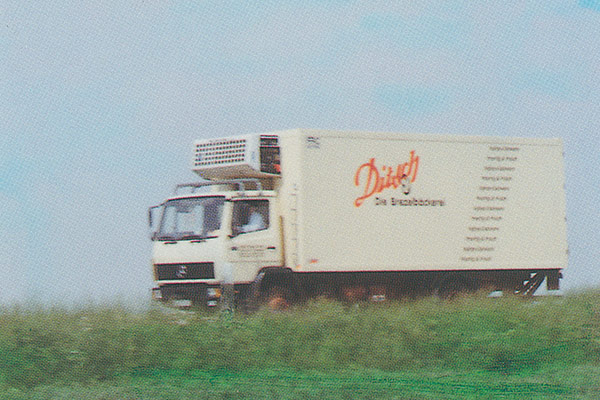 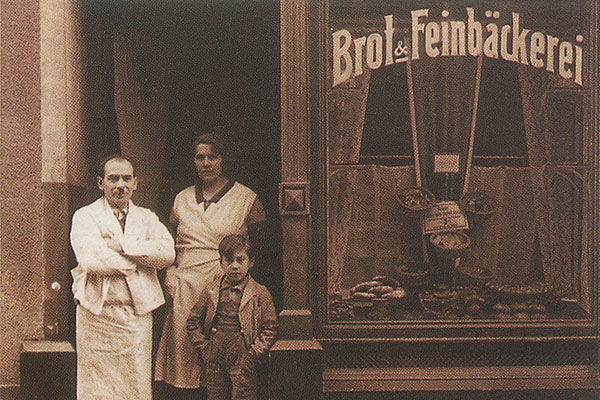 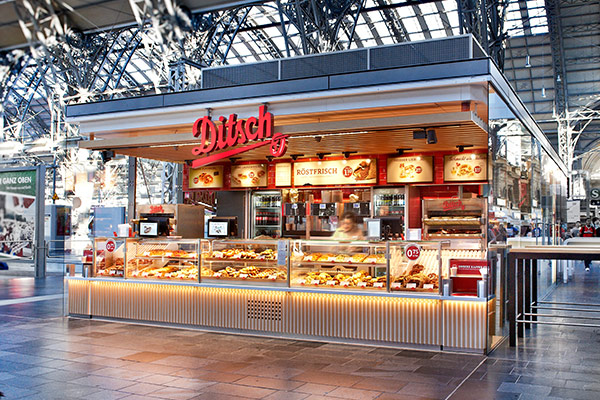 Many thanks to our sponsors for their support on our anniversary:

With over 200 shops to the company’s name, founder Wilhelm Ditsch’s idea is as relevant now as ever before: Ditsch is never far away when hunger strikes. After 100 years, the tradition lives on – as vibrant as ever and with a range of products of exceptional quality and diversity. With Ditsch USA and Brezelkönig Switzerland, Ditsch is now one of the world’s leading producers of pretzel products.

The Valora Group buys Cincinnati-based pretzel producer Pretzel Baron, meaning that it is producing on location in the USA for the very first time. In the following year, Pretzel Baron is renamed Ditsch USA. After 20 years in Oranienbaum, a new building for Ditsch is being planned with two further production lines. 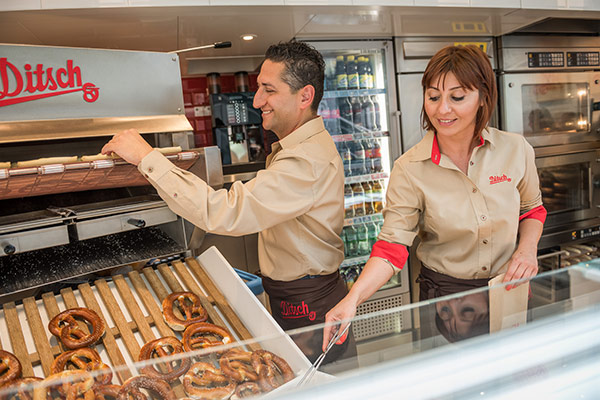 Going from strength to strength

The 200th Ditch shop is officially opened in Berlin and the 8th production line goes into operation at the Oranienbaum plant. Topping it all off are the significant resources saved through energy management at all locations.

The strong Ditsch brand is part of the international Valora Group from Switzerland with Peter Ditsch as anchor shareholder. A commitment to quality and a spirit of innovation remain part of Ditsch’s successful recipe in the following years. 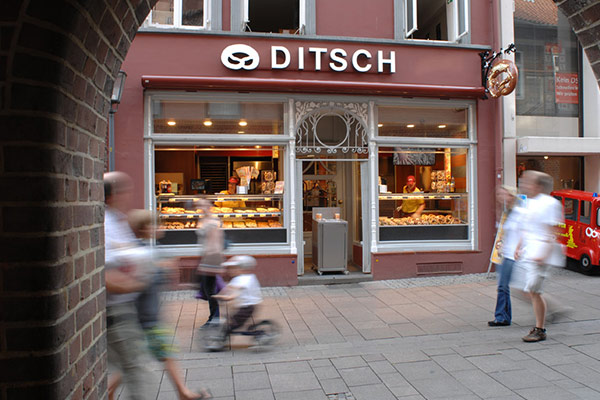 With a total of 180 shops, Ditsch now sells its pretzels throughout Germany, sharing the wonderful taste that Mainz has known and loved since 1919. The company headquarters in the Hechtsheim district of Mainz is given an extension.

Having already supplied the food retail and cash-and-carry sectors with a new product range in 2006, Ditsch now begins operation of a sixth production line in Oranienbaum.

Another award and a very special honour

This year, the prestigious Innovation Award “VR-InnovationsPreis Mittelstand” presented by Volksbanken and Raiffeisenbanken goes to Ditsch, but there is yet another reason to be proud: children’s TV programme “Sendung mit der Maus” – a veritable institution in Germany – pays a visit to show children the art of baking pretzels. 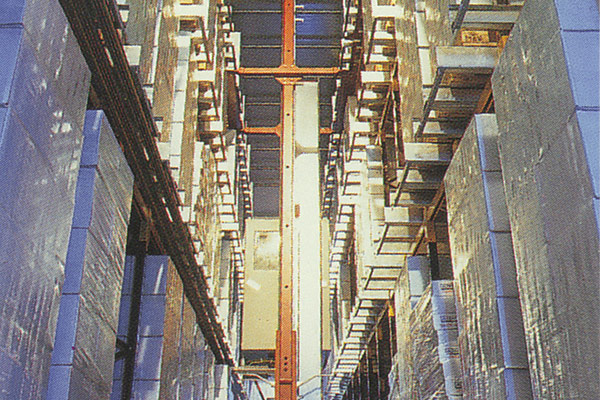 Ditsch is Entrepreneur of the Year

Presented by the international Ernst & Young Group, this award inspired the company to new heights in the same year, increasing production space in Oranienbaum to 15,000 m² and expanding the deep-freeze high-bay warehouse to 6,000 pallet bays. 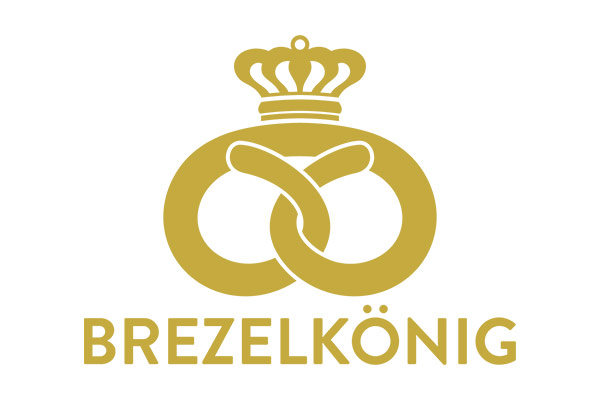 Ditsch takes over Brezelkönig AG, a company founded in Switzerland in 1995, and expands the Swiss shop network from five to around 30 locations over the next three years.

Official opening of the company’s second production facility: the new 7,700 m² Ditsch plant in Oranienbaum, near Dessau. A very promising location – and not just from a business perspective. As well as this, Ditsch moves into the B2B market. 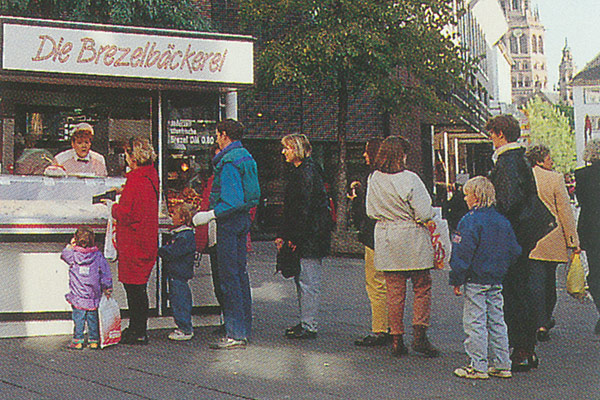 Even more reasons to celebrate

A small celebration already took place in 1995 to mark the opening of the 100th Ditsch shop. The following year, the company was presented with the Hamburg Food Service Award for outstanding services to the sector.

Ditsch has established itself as a quality brand and has every reason for celebrating its 75th anniversary: a small bakery in Mainz evolved into one of the largest direct marketers of oven-fresh pretzel products in Germany. 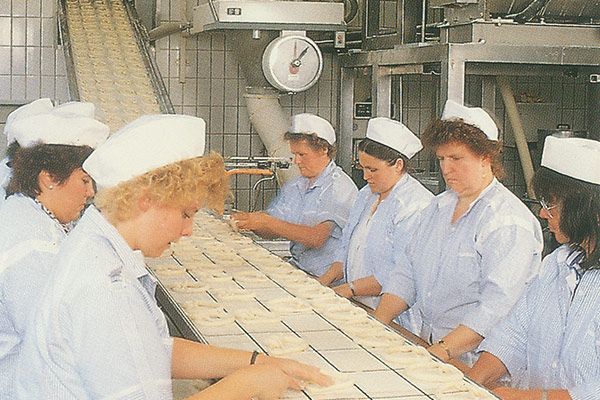 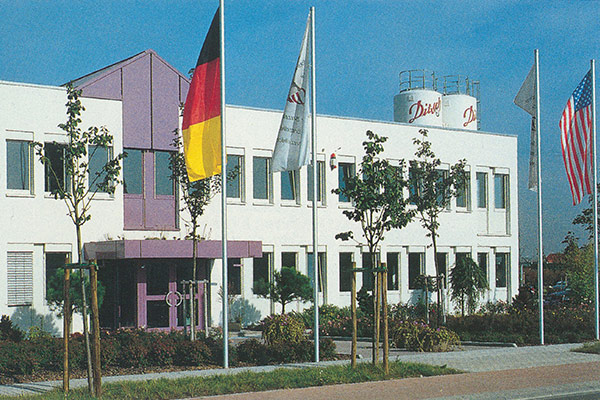 Company moves within the Hechtsheim district of Mainz: the new company headquarters has a production hall measuring 3,250 m² and two separate production lines, an administrative building with 750 m², a deep-freeze high-bay warehouse and a dispatch hall.

Peter Ditsch takes over – and wins an award

As the new sole shareholder of Ditsch GmbH, Peter Ditsch accepts the sector Oscar on behalf of the company: the “Marktkieker” is the most prestigious entrepreneurial and innovation award in the German baking sector. 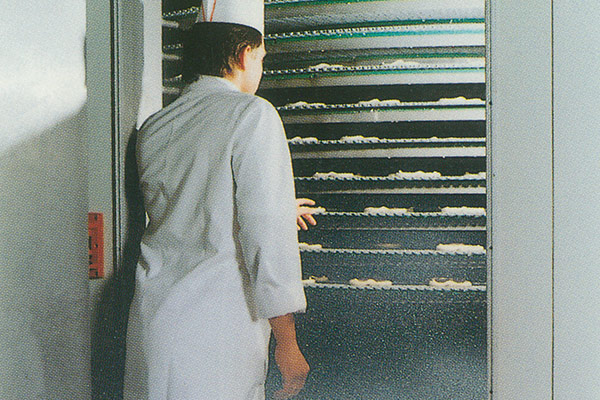 Even more room for new ideas

The production hall is expanded, introducing a spiral conveyor for proofing and freezing pretzel dough. New additions to the product range include Cheese Bakes and Ham & Cheese Sticks. 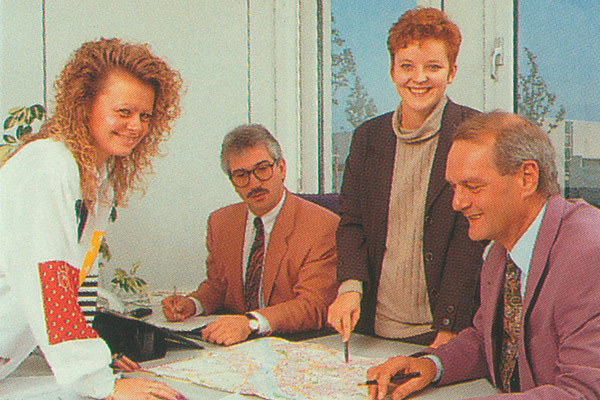 While the Kapuzinerstrasse location only had 60 m² and 40 m² of production and storage space respectively, the new bakery in the Hechtsheim district of Mainz is on a far larger scale – with 375 m² for production and 160 m² for administrative and social facilities 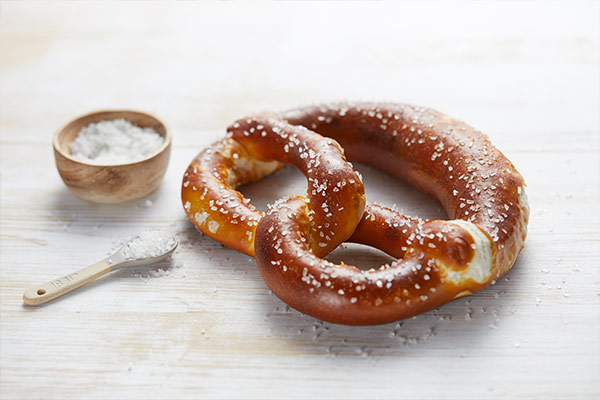 Demand for fresh Ditsch pretzels is growing rapidly, with production now focused primarily on pretzel dough for baking on location. The family bakery is now bursting at the seams with a team of 25 people. 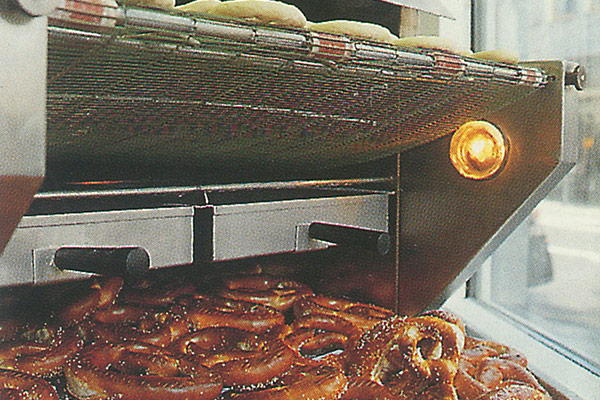 When Peter Ditsch saw this oven at a trade fair, he knew immediately that his company would be able to provide fresh, hot pretzels anywhere and at any time. Soon afterwards, the first deep-frozen pretzels are baked on location in stationary Ditsch shops. 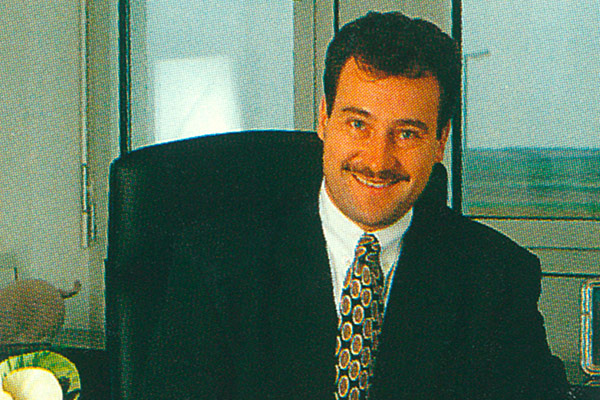 For the love of pretzels: Peter Ditsch

Peter Ditsch joins the family business and soon takes over responsibility for sales organisation. The first mobile pretzel stands that can be collected at the end of the day can be attributed to his initiative.

The first ever Ditsch pretzel stand

A brilliant business idea: setting up a pretzel stand in Mainz Central Station to allow people to stock up on snacks before catching their trains. At this stage, the stand still needs to be set up in the morning and taken down in the evening.

Company growth on the rise

Under Heinz Ditsch, the family company expands, specialising in durable products like pre-packaged pretzels and salt sticks in cellophane bags. These are a resounding hit in pubs and taverns and at local festivals.

Heinz Ditsch and the pretzel men

In 1952, Wilhelm Ditsch handed over the bakery to his son Heinz. It was he who initiated the first “pretzel men”, who sold fresh pretzels out of baskets in the pubs and taverns of Mainz and at local festivals. 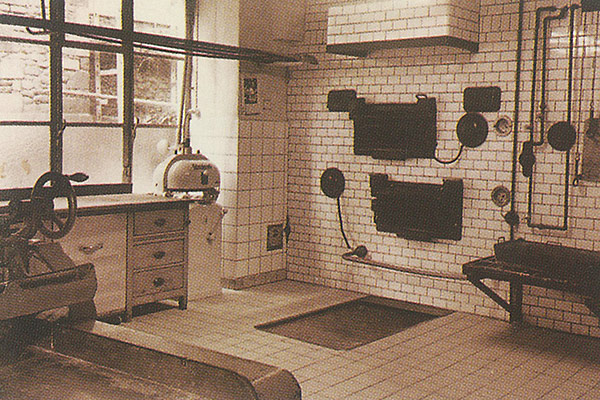 A new bakery and a new beginning

Upon returning from war captivity, Wilhelm and his son Heinz begin to rebuild the bakery on Kapuzinerstrasse themselves. Mainz and the surrounding area have their Ditsch pretzels again. 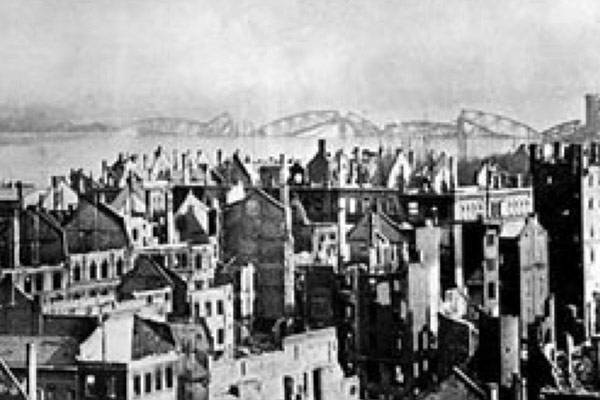 While Wilhelm Ditsch and his son Heinz are off fighting in the Second World War, the final and most devastating bombing raid on Mainz on 27 February 1945 also hits and destroys the bakery in Kapuzinerstrasse. 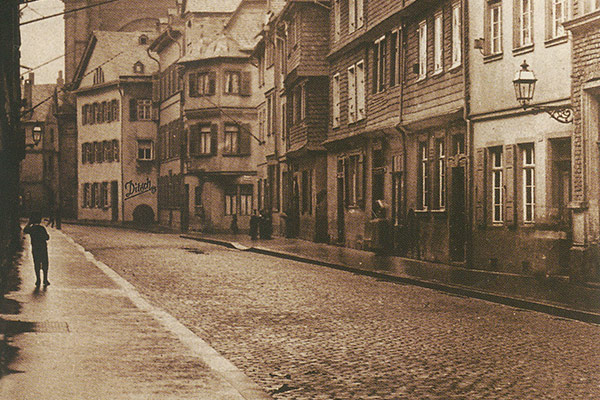 The bakery on Taunusstrasse is destroyed by the very first incendiary bomb to hit Mainz. Ever the optimist, Wilhelm Ditsch moves to Kapuzinerstrasse 38, but two heavy Allied bombing raids on Mainz follow in 1942 and 1945.

After a premises without a retail area is acquired at Taunusstrasse 1 in Mainz, the bakery is granted its first official permit to bake pretzels on two Sundays with a view to supplying the public festivals in nearby Rüsselsheim and Bad Homburg.

It all began with Wilhelm Ditsch

He paved the way for the 100-year Ditsch tradition: in 1919, Wilhelm Ditsch has his “pretzel bakery”, located at Löhrstrasse 17, entered in the Mainz Commercial Register.